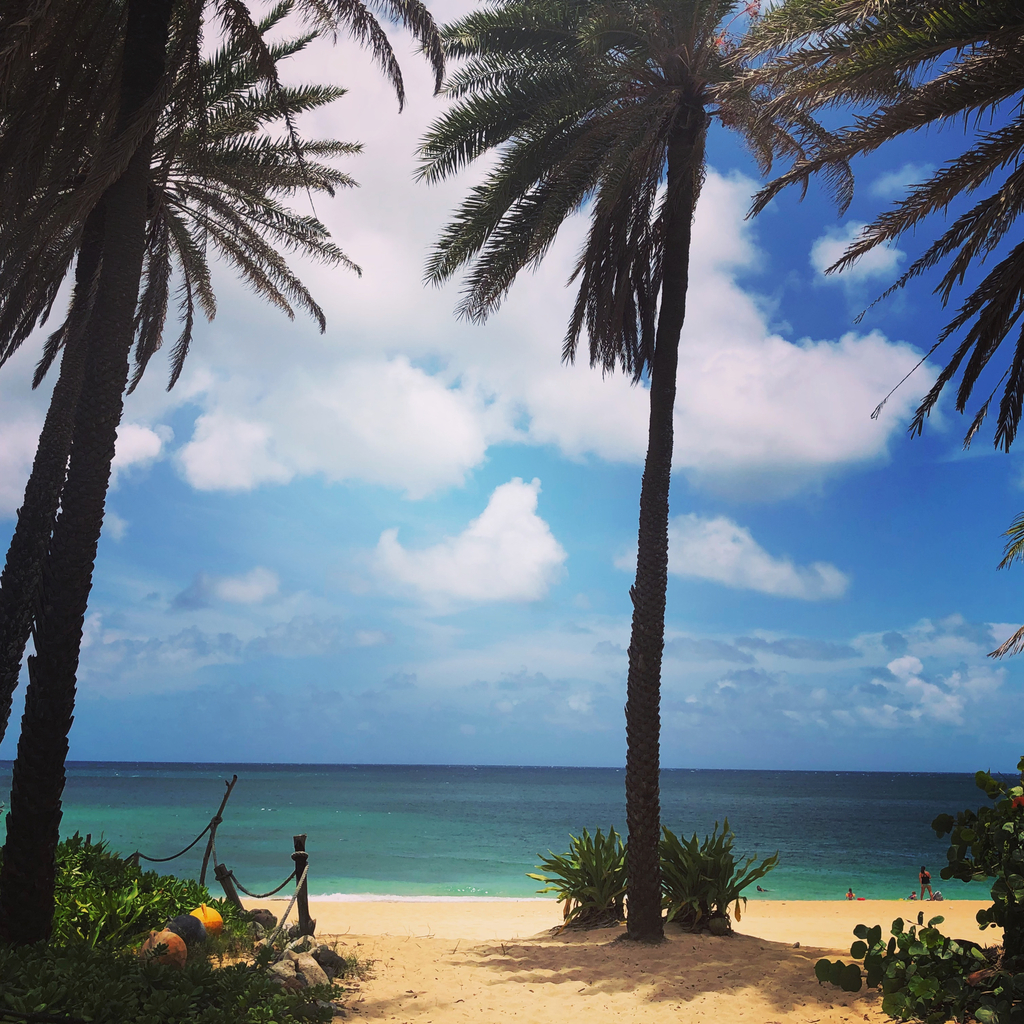 Home to many great sea turtles. It seemed an appropriate place for a bunch of okTurtles to host our most ambitious hackathon to date! 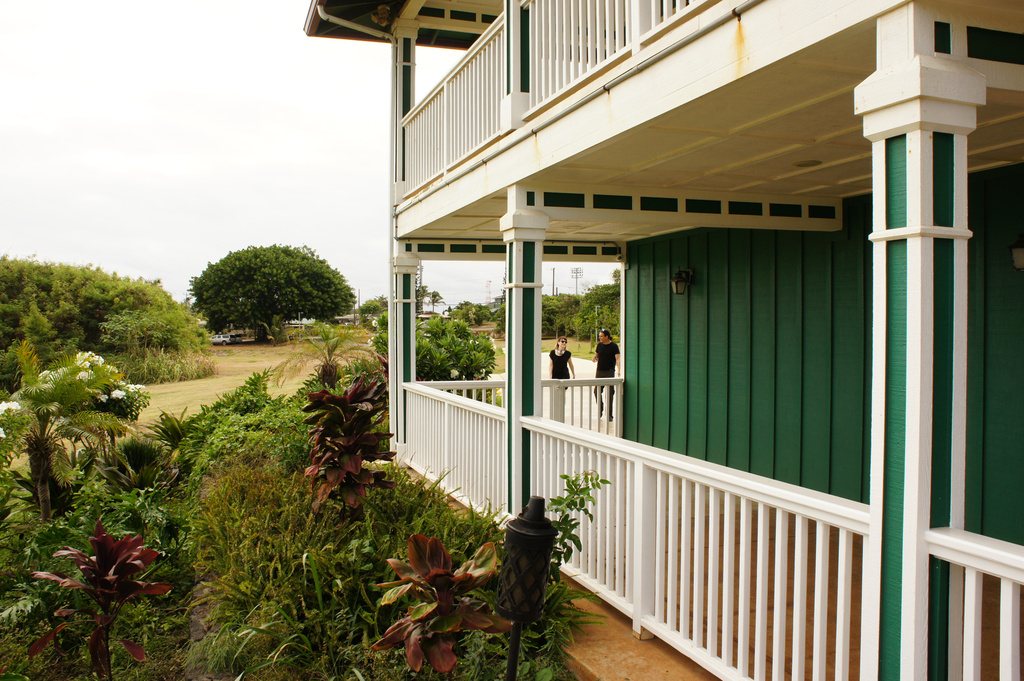 As guests trickled in to the AirBnB, Sandrina Pereira added her finishing touches to our schedule cards. Each guest was to receive a card, and it would let them know how the rest of the week was to unfold. 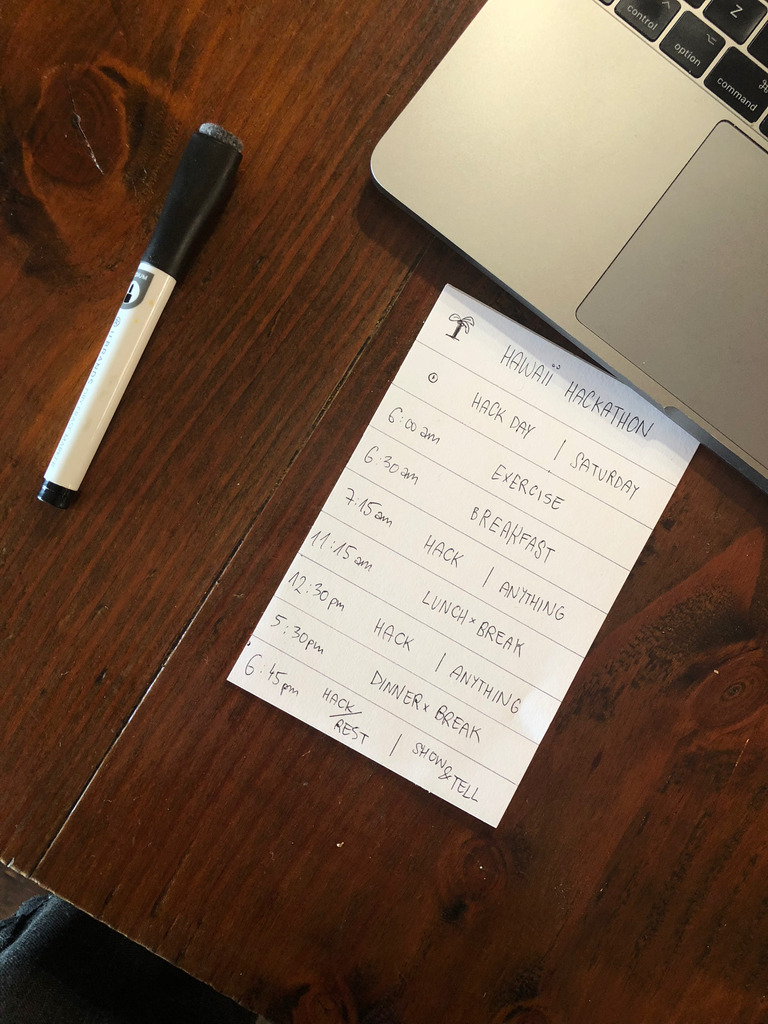 The only change we would make to this schedule would be to make Wednesday an additional day of island R&R.

Each day would start with morning exercise (for those inclined), followed by breakfast. I joined Victor Morrow for some Yoga with Adriene while Andrea and Sandrina ran outside.

When they returned, Andrea Devers prepared amazing vegan breakfast for all — breakfast so legendary that it caused Sandrina to remark, “I could go vegan, if I had this.” 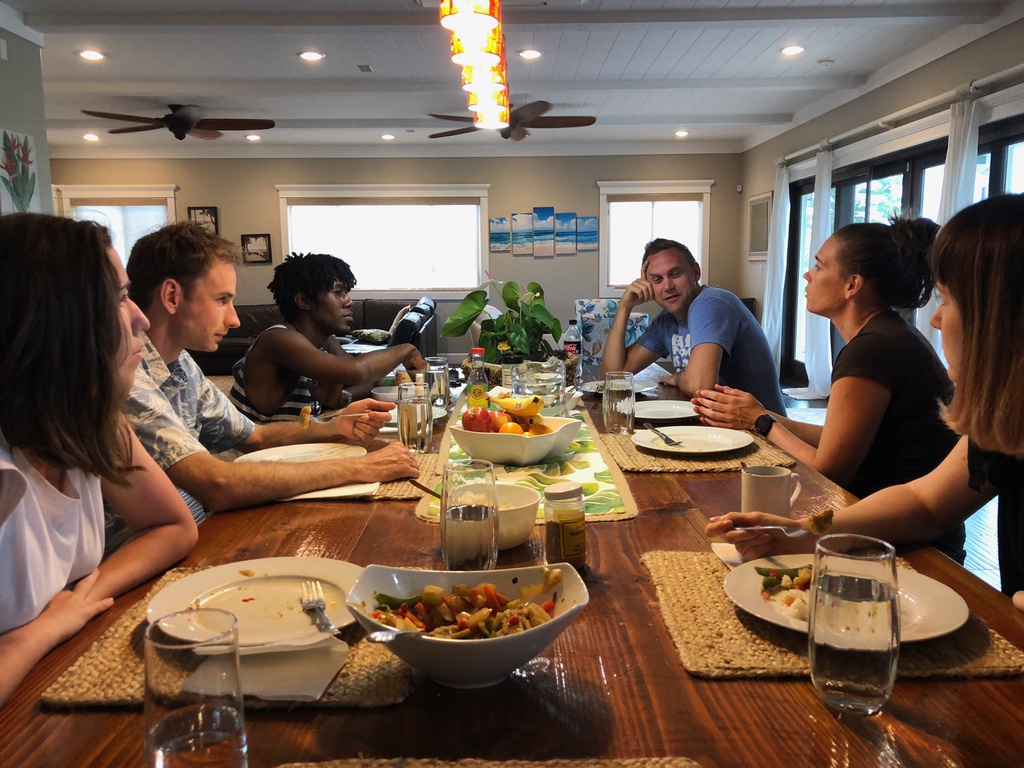 Then came four hours of hacking. 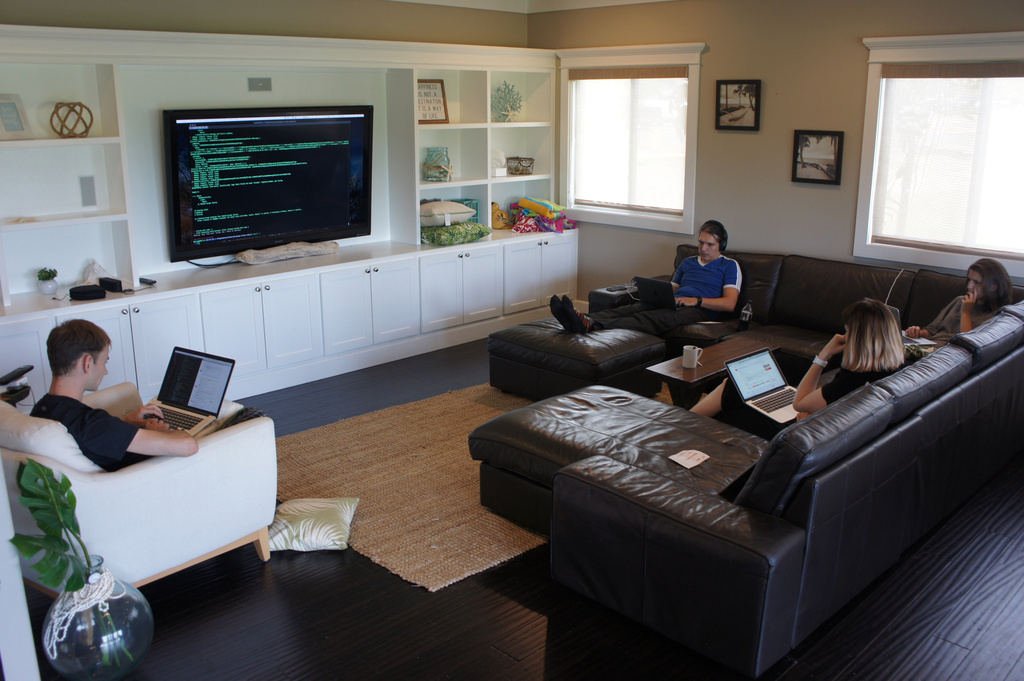 Sometimes people worked inside, sometimes they worked outside. 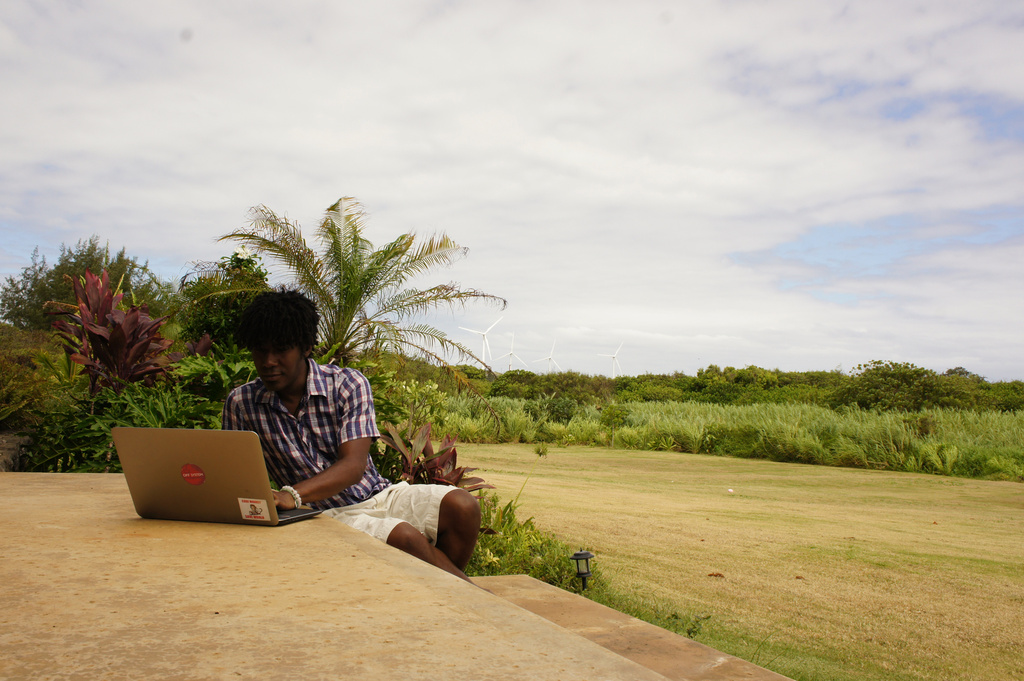 On the first day I helped delegate tasks for the week, so that everyone could hit the ground running.

I would be finishing a rewrite of our core data structure, simplifying our codebase. Volunteers Victor and Tamas Kalman worked on removing third-party dependencies and researching Interledger integration. Anikó Fejes and Sandrina focused on the proposals system and implementing the UI/UX.

While we toiled away, Scott moved freely about the compound, looking and feeling very much at home. Perhaps this was because growing up, he had in fact called this island (Oahu) home. 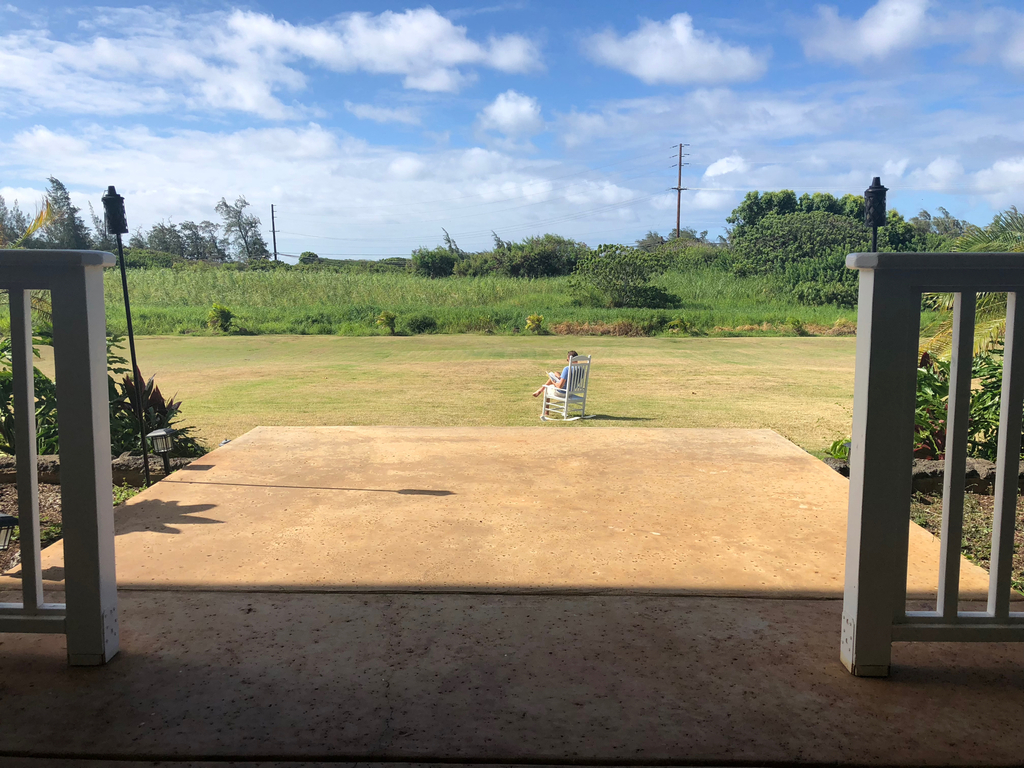 Scott was there as our spirit guide. When he wasn’t thinking or reading, he could be found writing yet another brilliant post for his Basic Income blog. He has the uncanny ability to connect virtually any subject to Basic Income, and on the second night he took the group through The BIG Experience to inspire and remind us why we are working on this project in the first place.

I asked Scott the same question we asked attendees of our previous hackathon: What is it about Group Income that excites you most?

“The most exciting thing for me about Group Income is empowering people to immediately create some kind of floor of income between each other instead of needing to wait for however long it will take until enough people demand it as part of the rest of what is considered a normal function of government protections, and even then it can exist alongside state and national UBIs as additional economic security and further strengthening of communities in the many various ways those can be defined in our globalized world.”

Scott had brought with him several copies of the book Raising the Floor — an appropriate title given how succinctly it describes Group Income’s algorithm (and Basic Income in general): 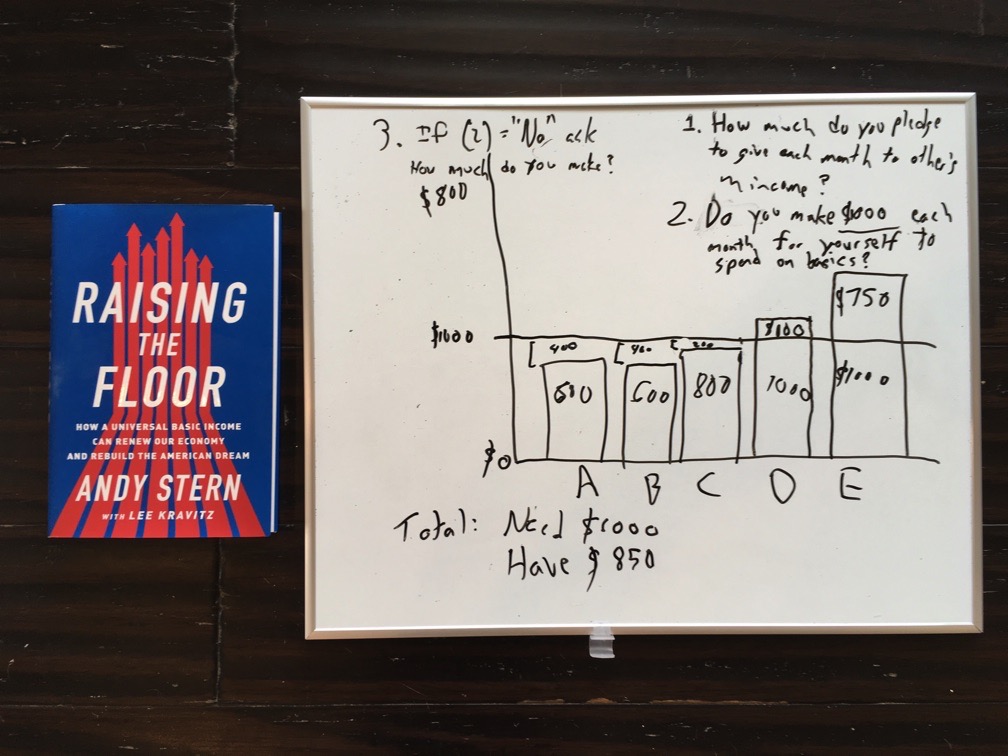 Four hours flew by. Suddenly, it was time for lunch.

We were fortunate to have our very own gourmet vegan chef in the form of Andrea Devers (okTurtles director and hackathon organizer). 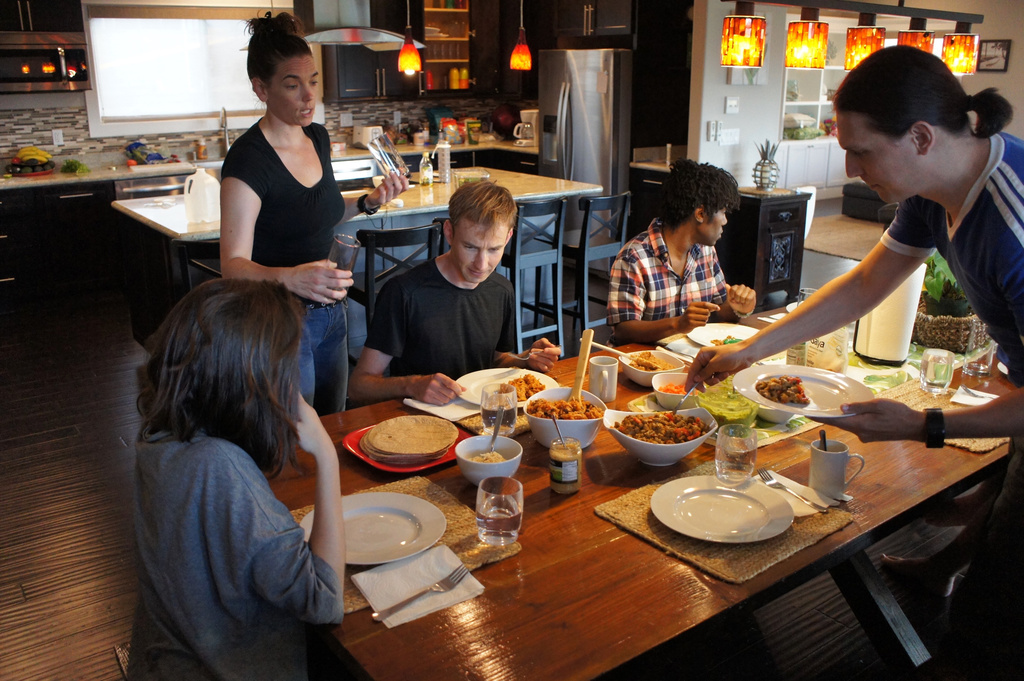 Whether it was rice pilaf or pizzadillas or chunky pasta — she had the team covered every day with healthy, delicious meals. 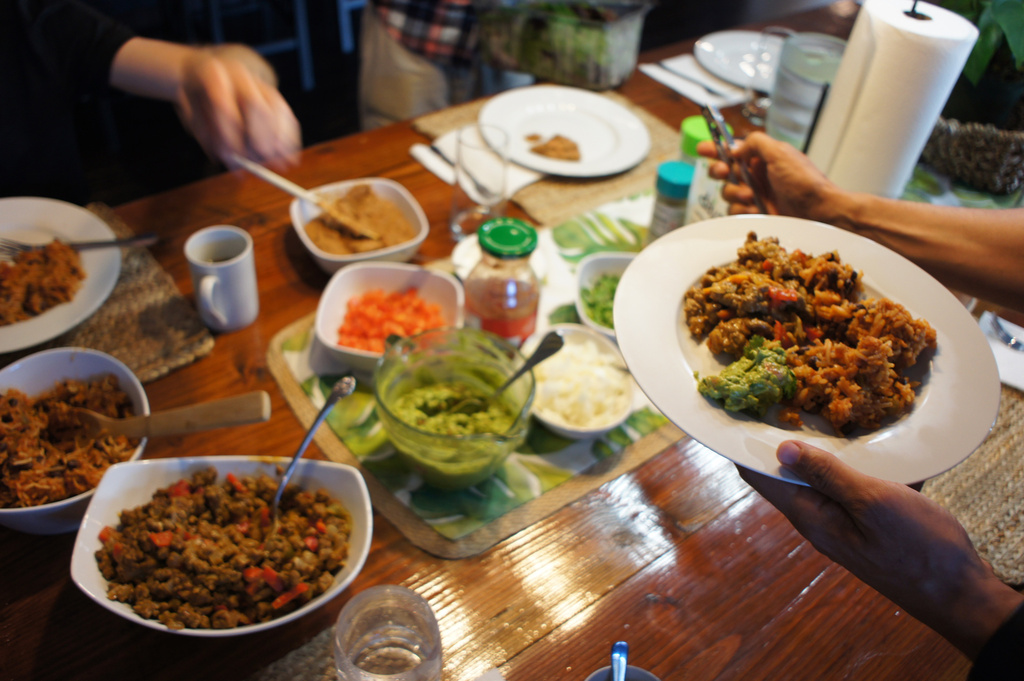 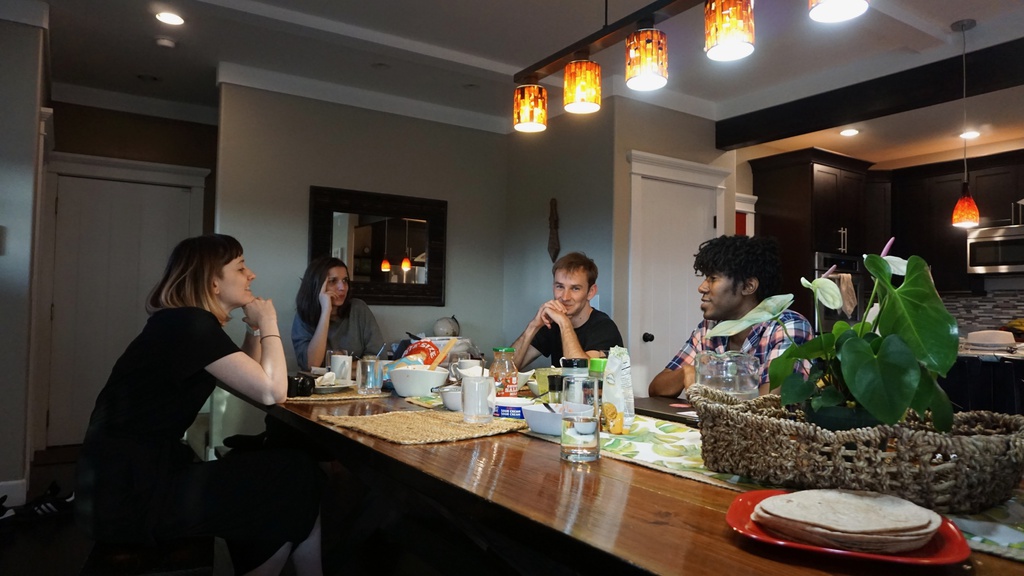 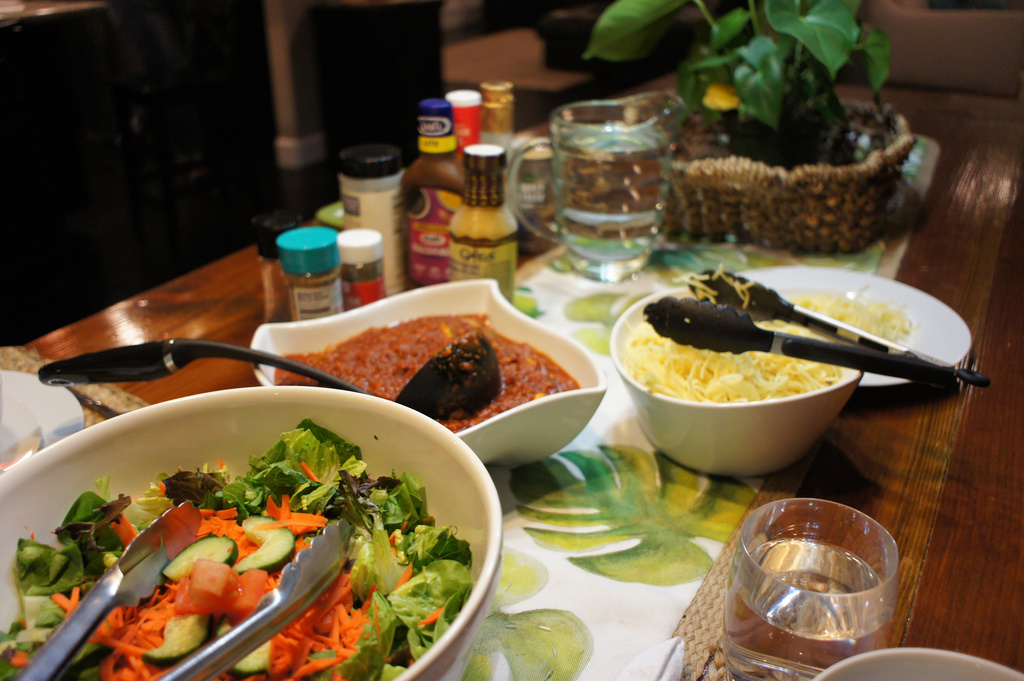 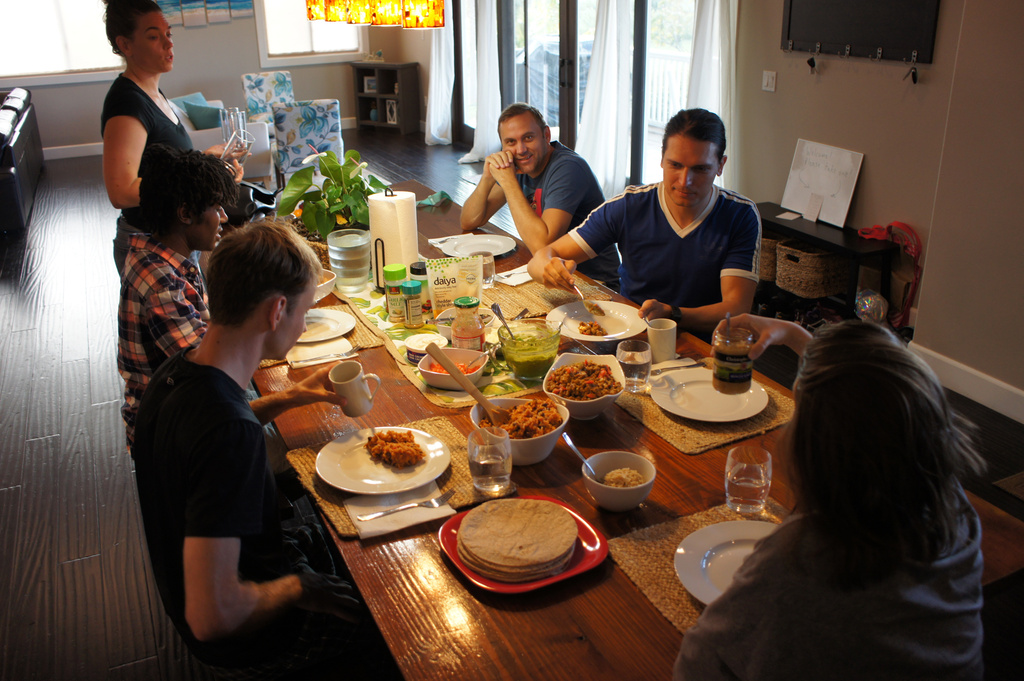 After lunch it was back to work!

Every hack night ended with a Show & Tell session. 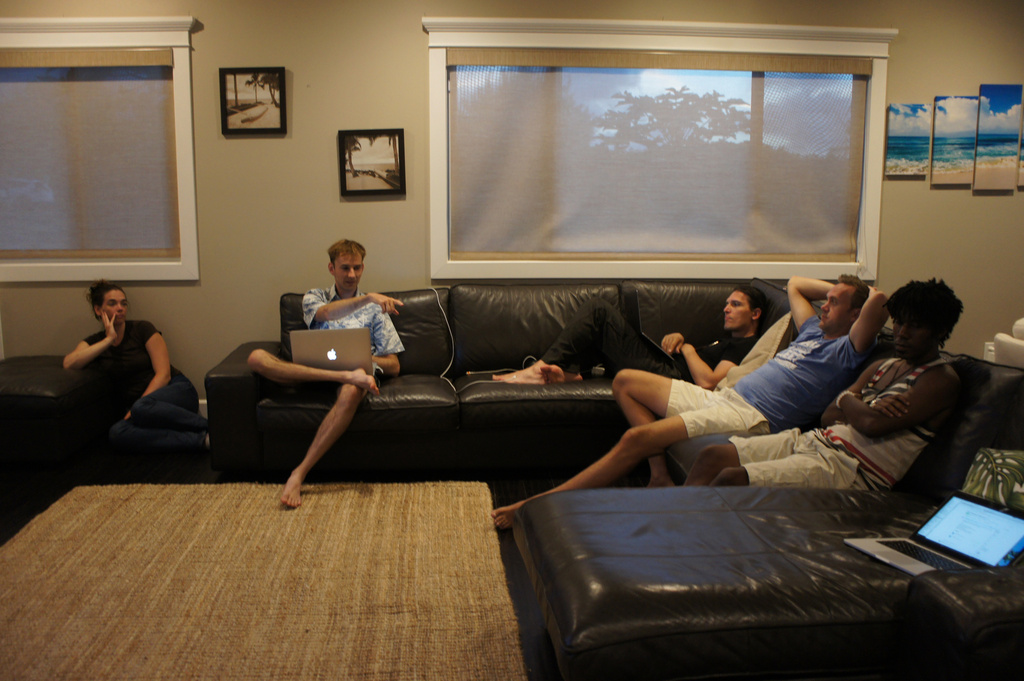 We took turns sharing what we’d accomplished that day. 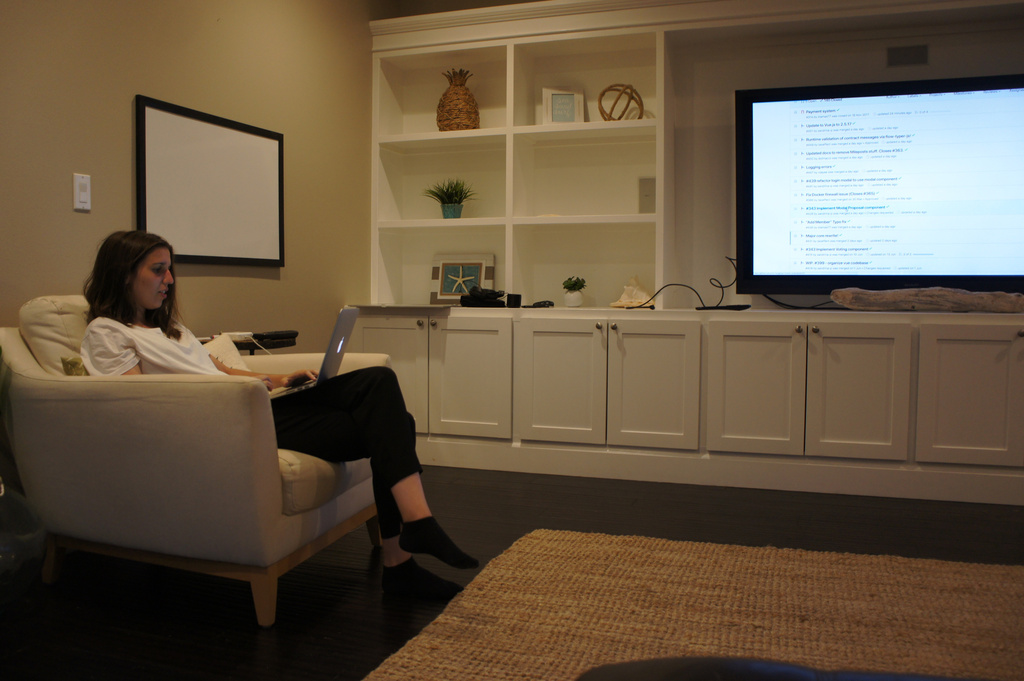 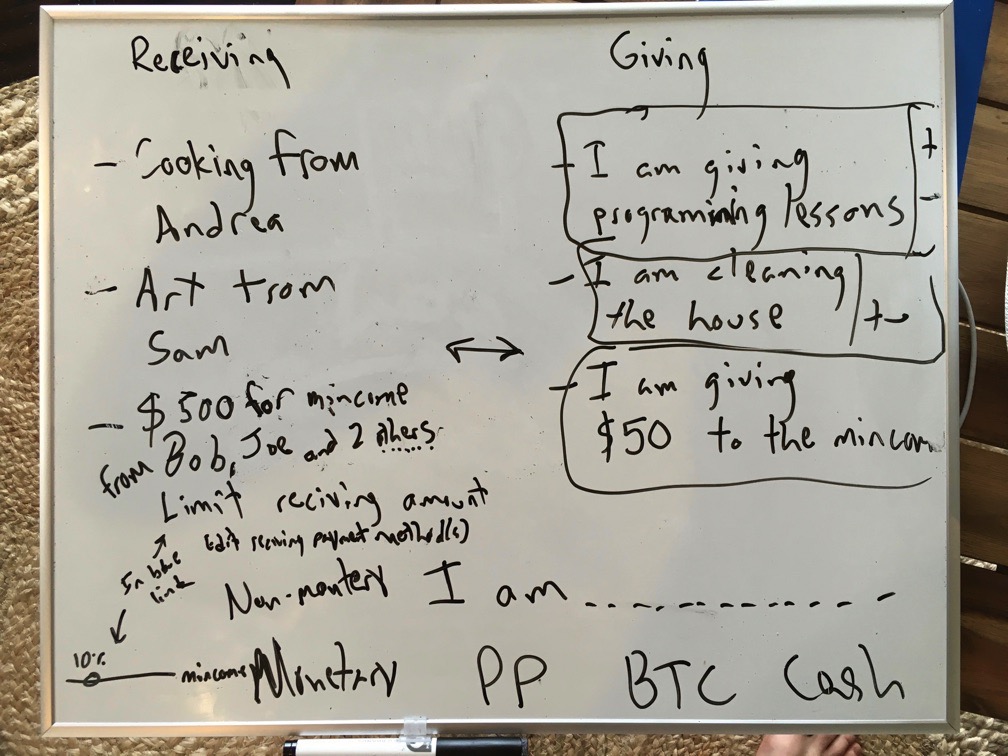 Would by nightfall transform into something beautiful.

In Group Income, users must be able to declare and see what they’re giving and receiving from the group. This is where the idea for the design above comes from.

Its implementation came courtesy of Sandrina and demonstrates the core of the Group Income ethos — the idea that the contributions and value that people have to give to others cannot (and should not!) always be measured in monetary terms.

What excites Sandrina most about Group Income?

“I love Group Income for its transparent idea of sharing income with a group of people that you care about. Group Income is a place where I feel safe and comfortable in helping and being helped in a sustainable way as a community.”

Now that we had a clear way of visualizing the give & take that takes place within the group, we needed a user interface where users could feed the inputs to the distribution algorithm Tamas had implemented.

For this we would need to ask the user a question: whether or not they made more or less than minimum income (mincome) the group had decided upon.

If they said “no”, we ask them how much they make: 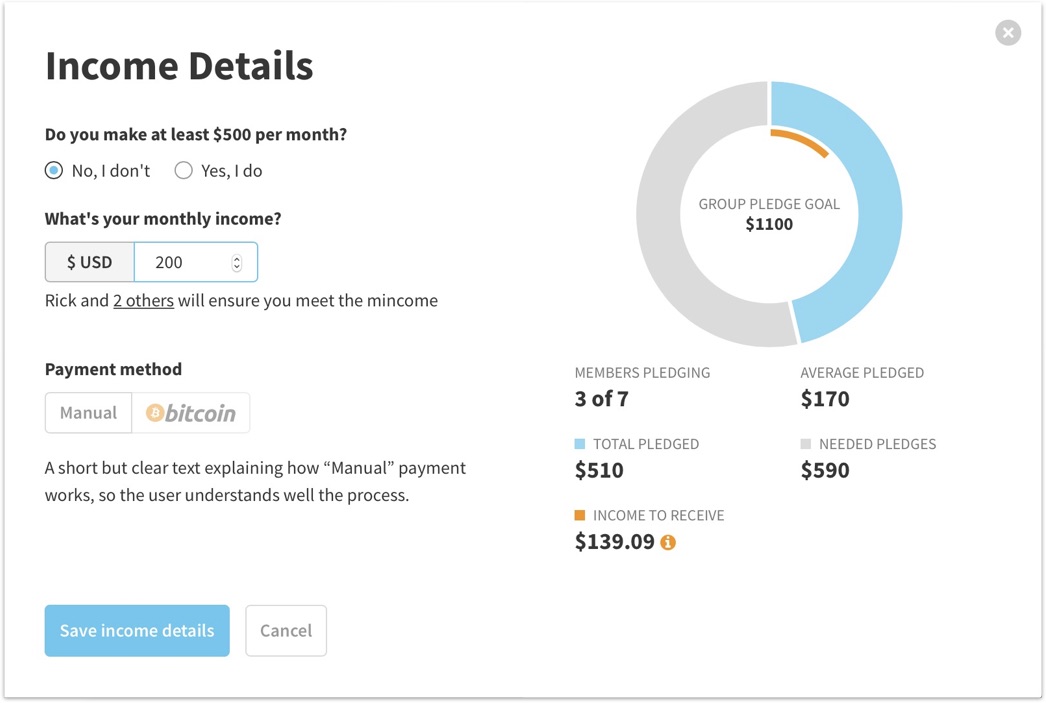 And if they say “yes”, we ask them how much they’d like to pledge to the group: 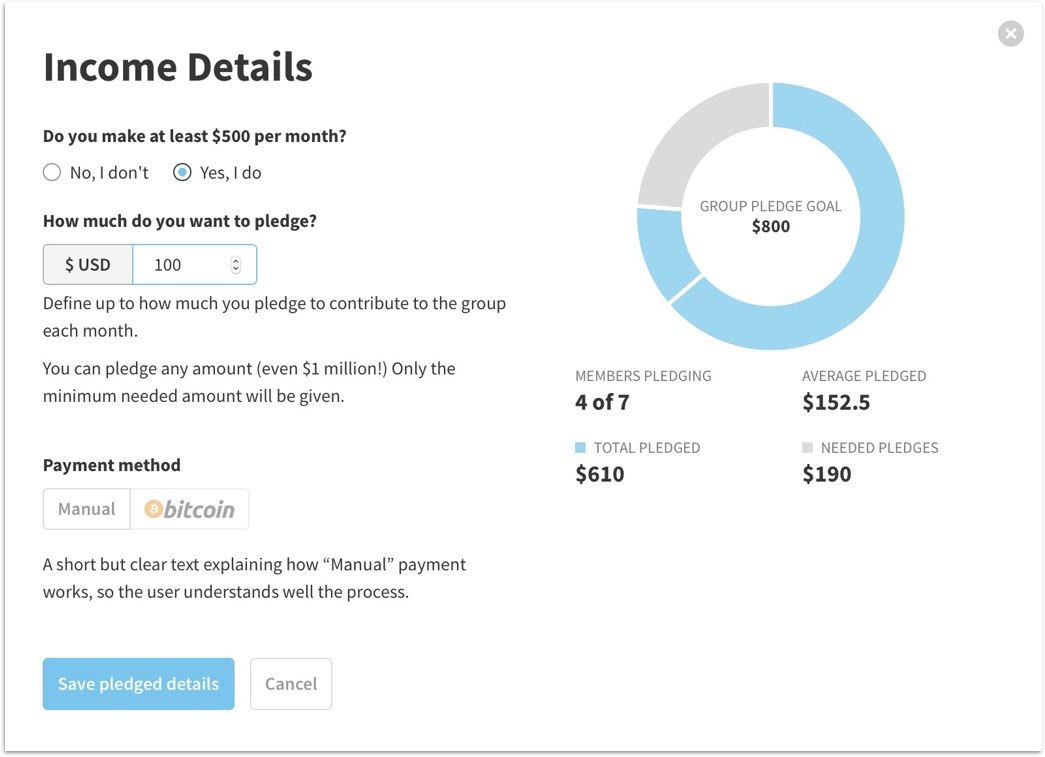 With this and other new components implemented, we needed a design for a basic navigation bar, so we took a queue from apps like Slack, Gitter and Discord to create a familiar user experience: 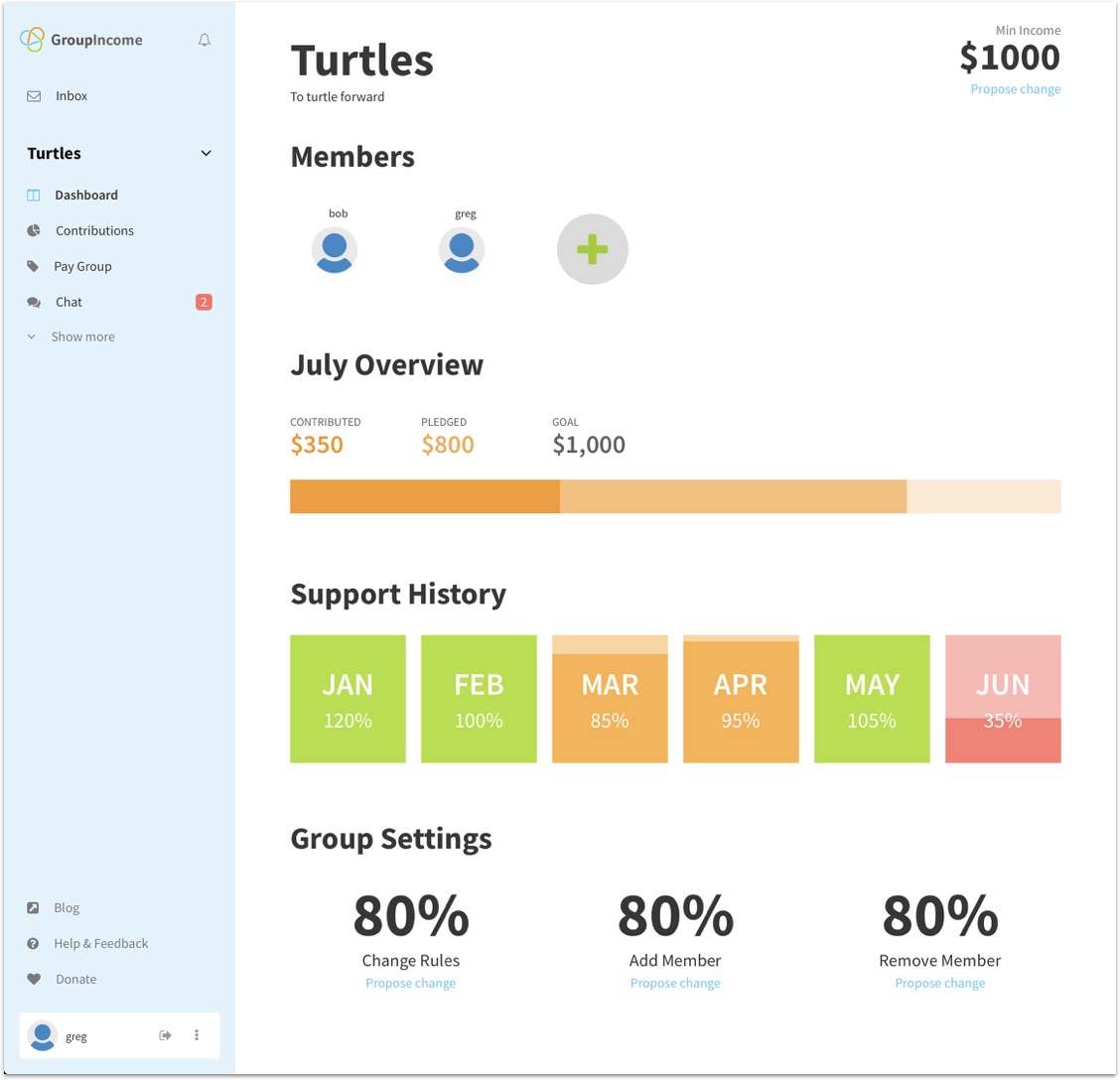 You’ll note that many parts of the UI have little blue links next to them that read, “Propose change”. These allow users to propose changes to group. For example, if a user wants to change the group’s minimum income, they can click the Propose change link next to where the minimum income is displayed, and a dialog not entirely unlike the unfinished one below will appear: 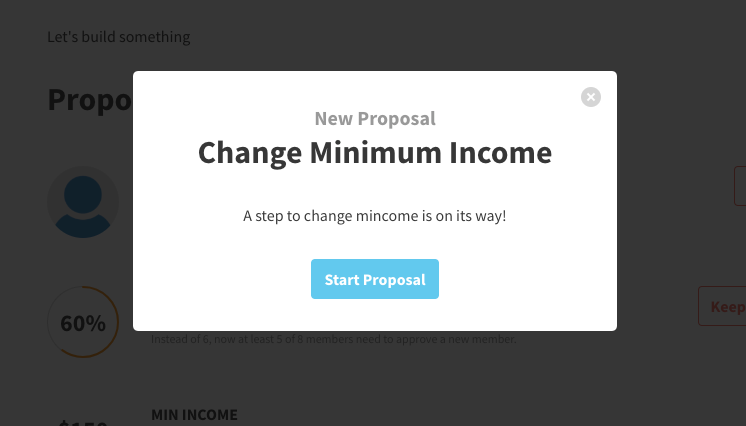 It turns out there’s no sense in hosting a hackathon in Hawaii if you plan to stay indoors the entire time.1 And with a team from all over the world, some had traveled great distances to be there! Thus, we made sure to give ourselves a few days to venture outside and explore!

Did you know that Hawaii has chickens everywhere? 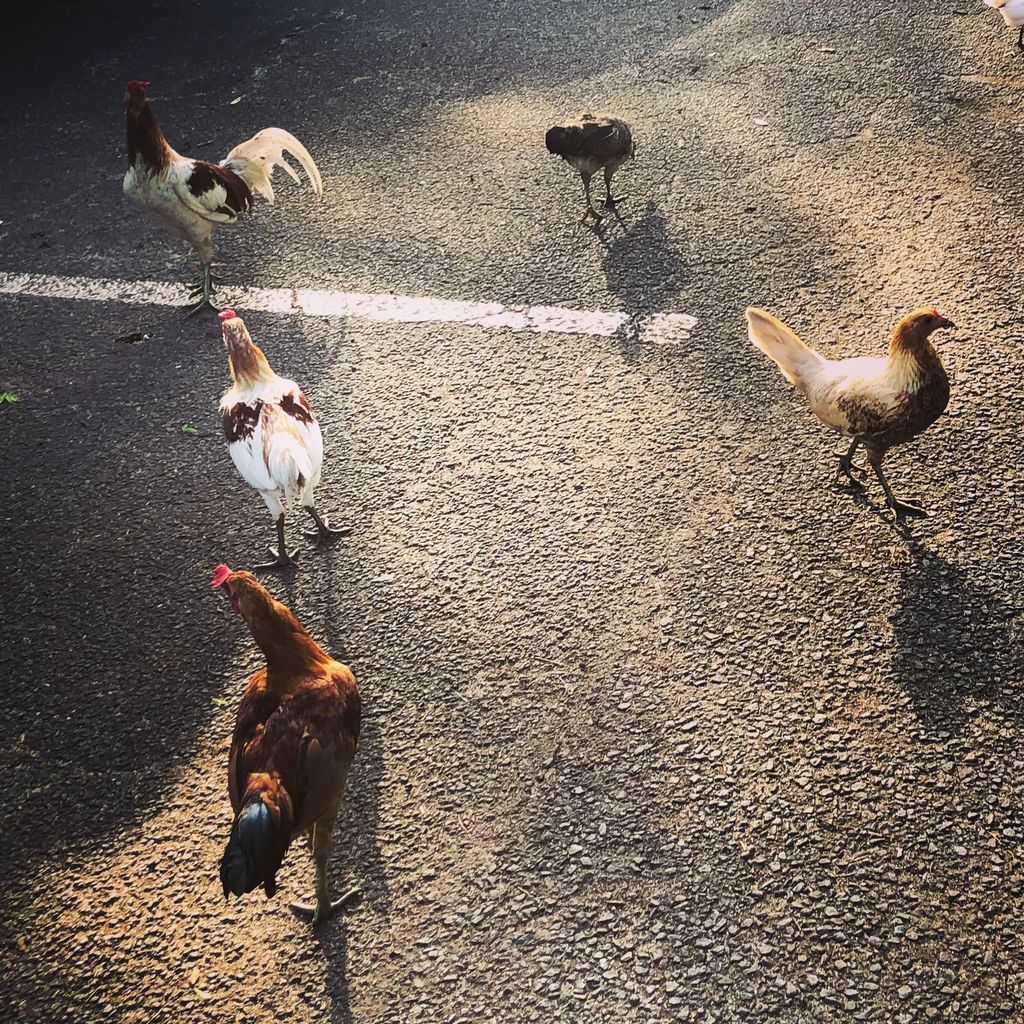 They roam about the islands freely.

On the way to the beach, we stopped by a fruit stand, and there we saw more chickens! You could sit right next to them. 🙂 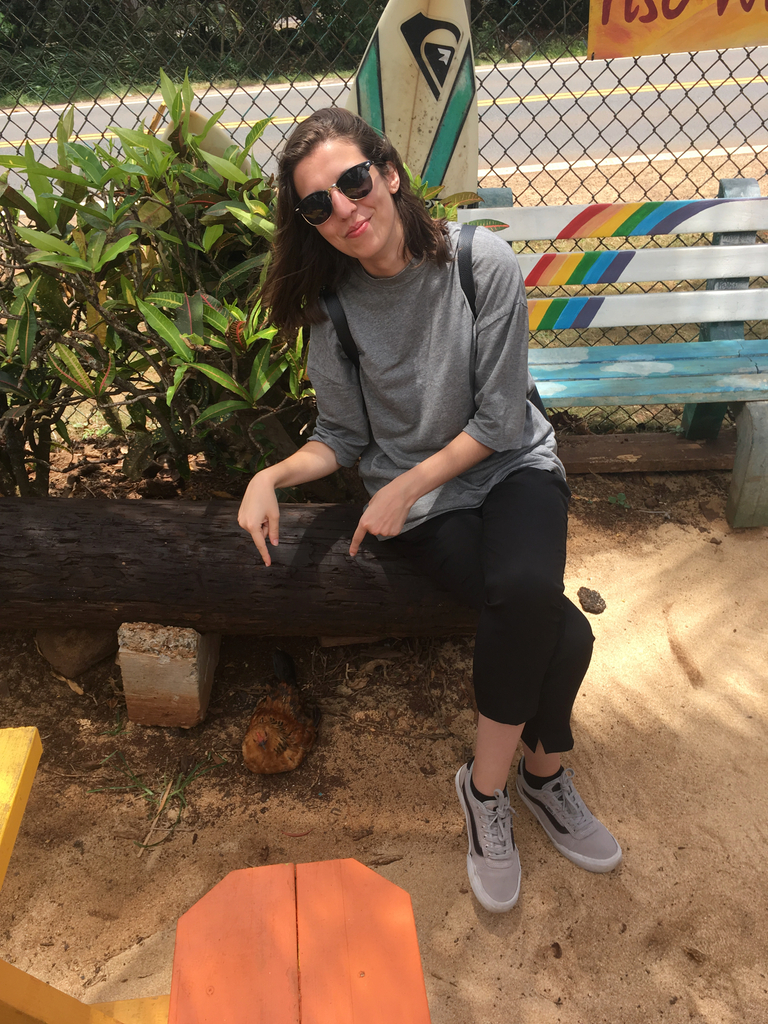 We had a great time at the beach. The opening photograph to this post was taken there. It looked like you’d imagine a Hawaiian beach would. 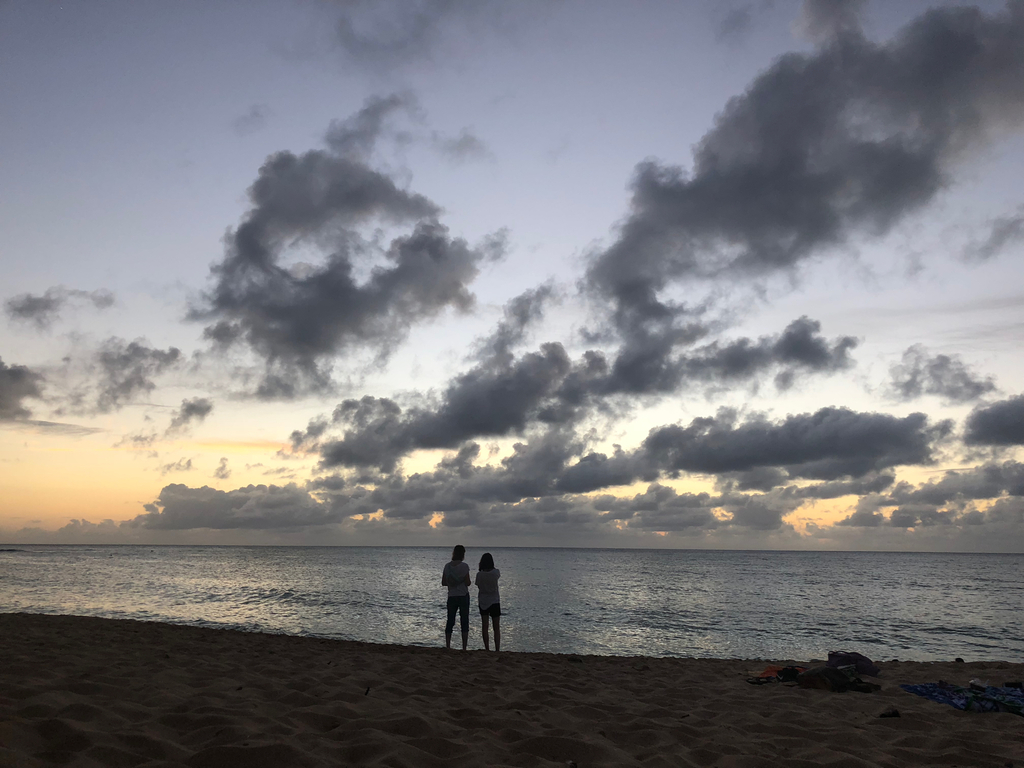 The next day, it was back to work! Hack hack hackity hack hackathonnnnn!!!

During the hackathon we managed to merge 23 pull requests! That’s like more than 4 pull requests per hack-day!2 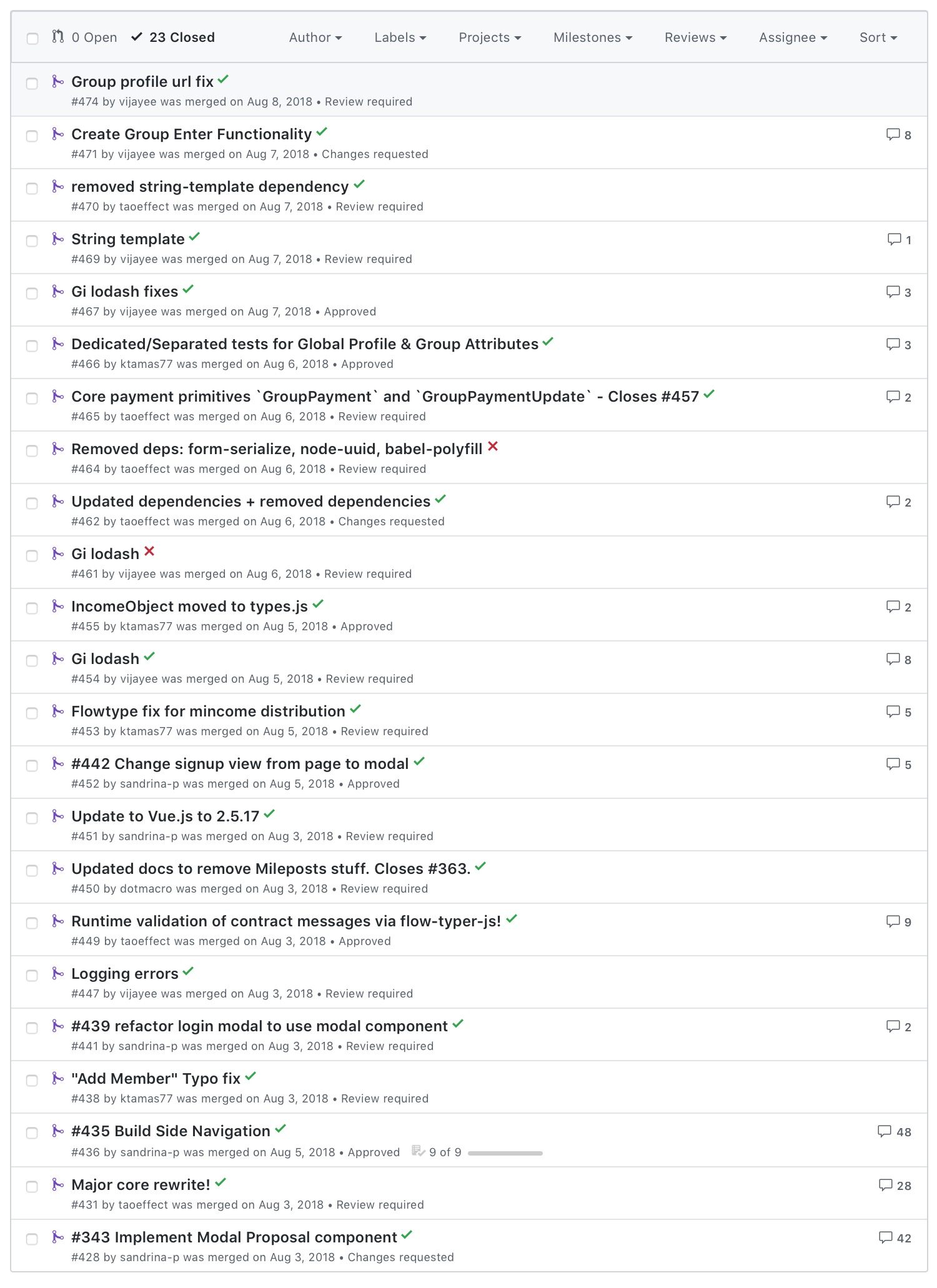 So by the end everyone was (a) exhausted, (b) filled with a massive sense of accomplishment, and (c) ready to have fun on the island one last time!

Which brings me to Tamas. 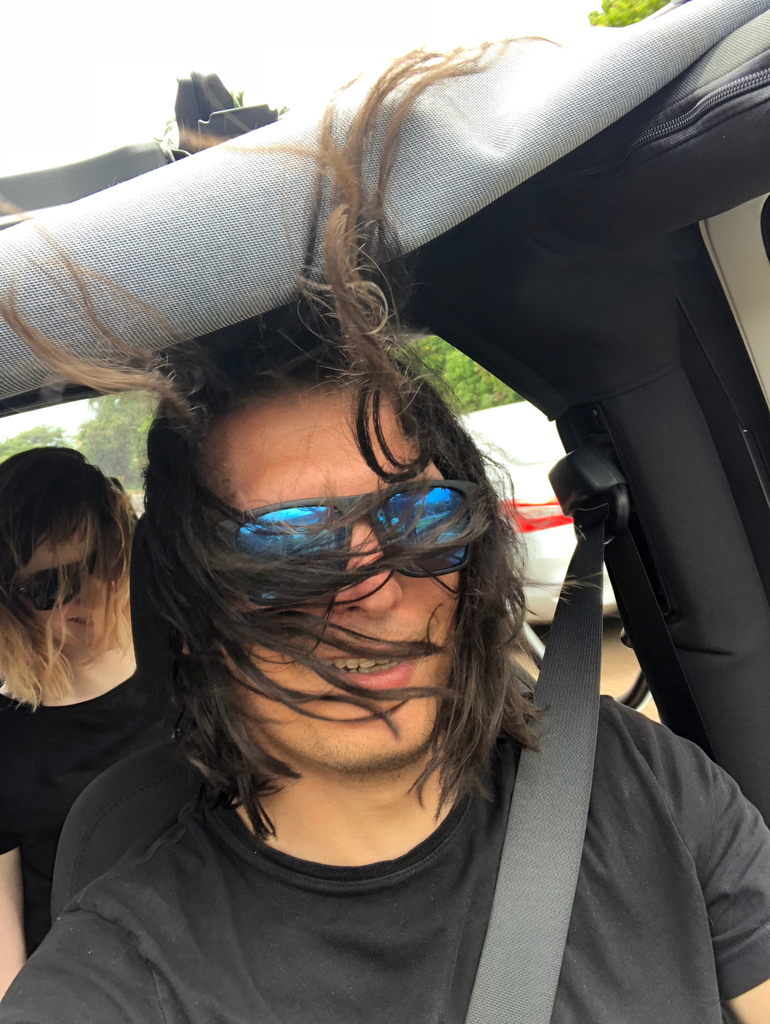 Just look at him. He looks like a badass, doesn’t he? He is a badass. He can fly a freakin’ helicopter! (For real.)

Tamas, Sandrina, and Andrea took to the sky, and after seeing the photographs they brought back I kinda wish I had gone with them: 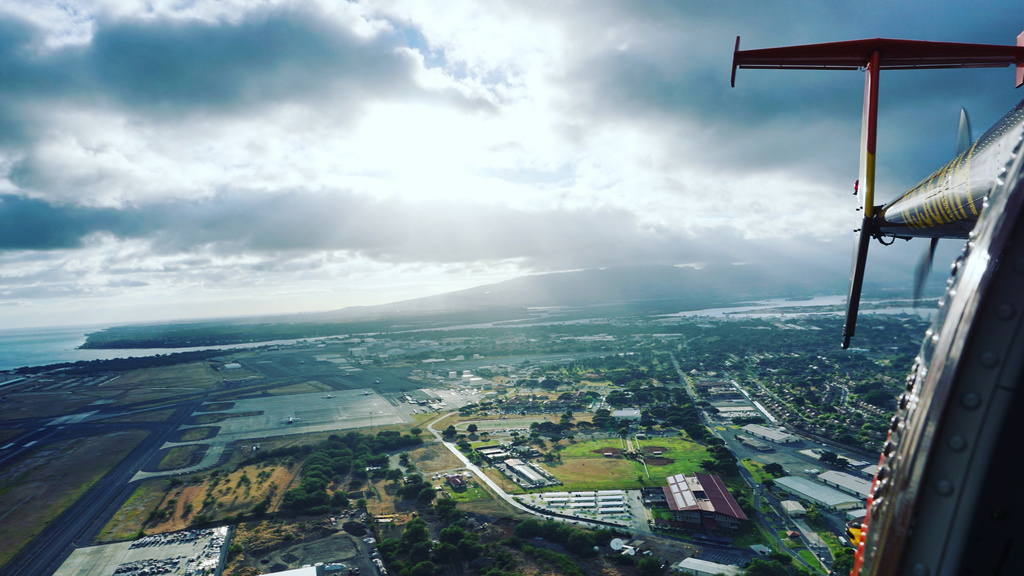 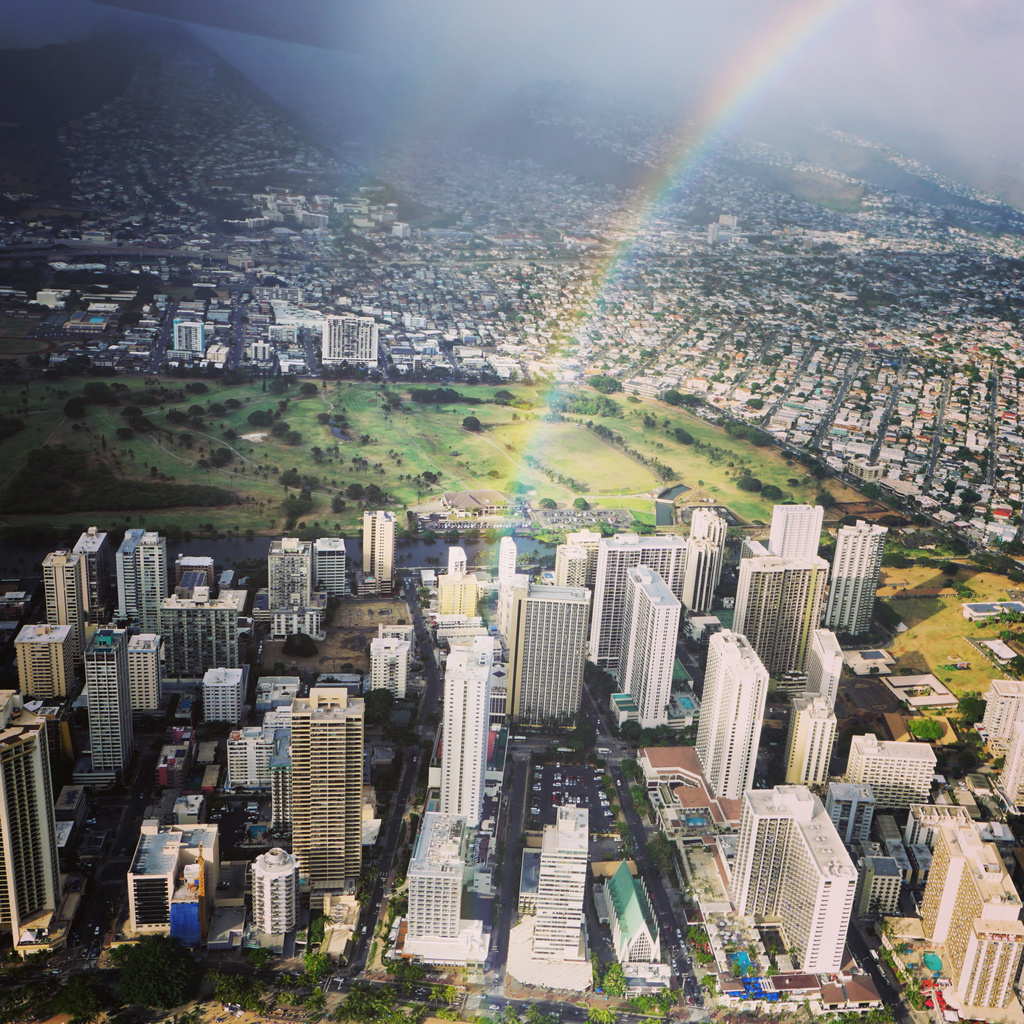 These were taken from the helicopter Tamas was flying around Oahu.

Did you know rainbows are actually circles? I did not fully appreciate this fact until they showed me this amazing photograph: 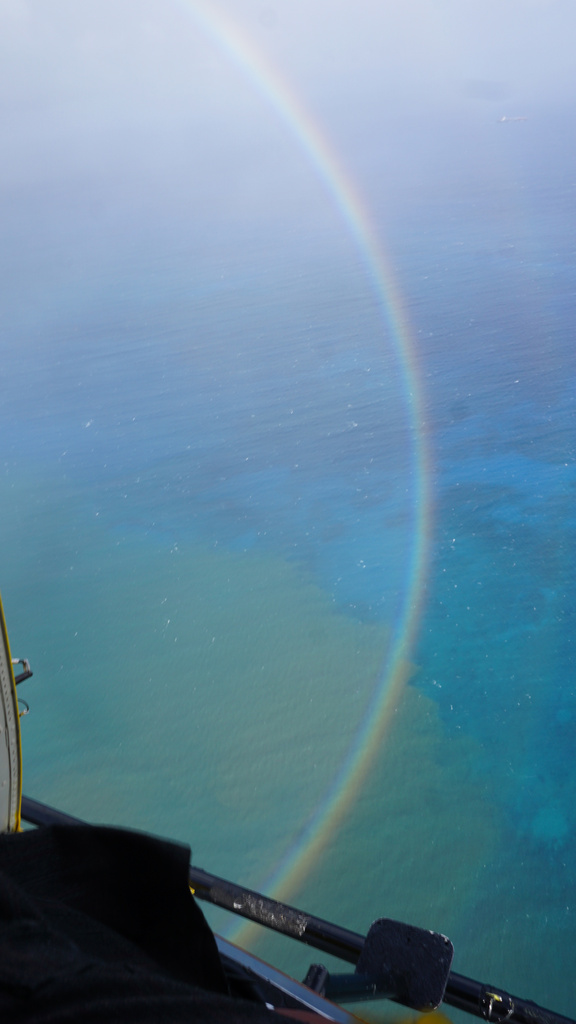 The rainbow is too big for the camera to capture all of it, but you can see the quarter of it that is the “side rainbow”.

I think modern video games are almost (but not quite) up to this level of realism: 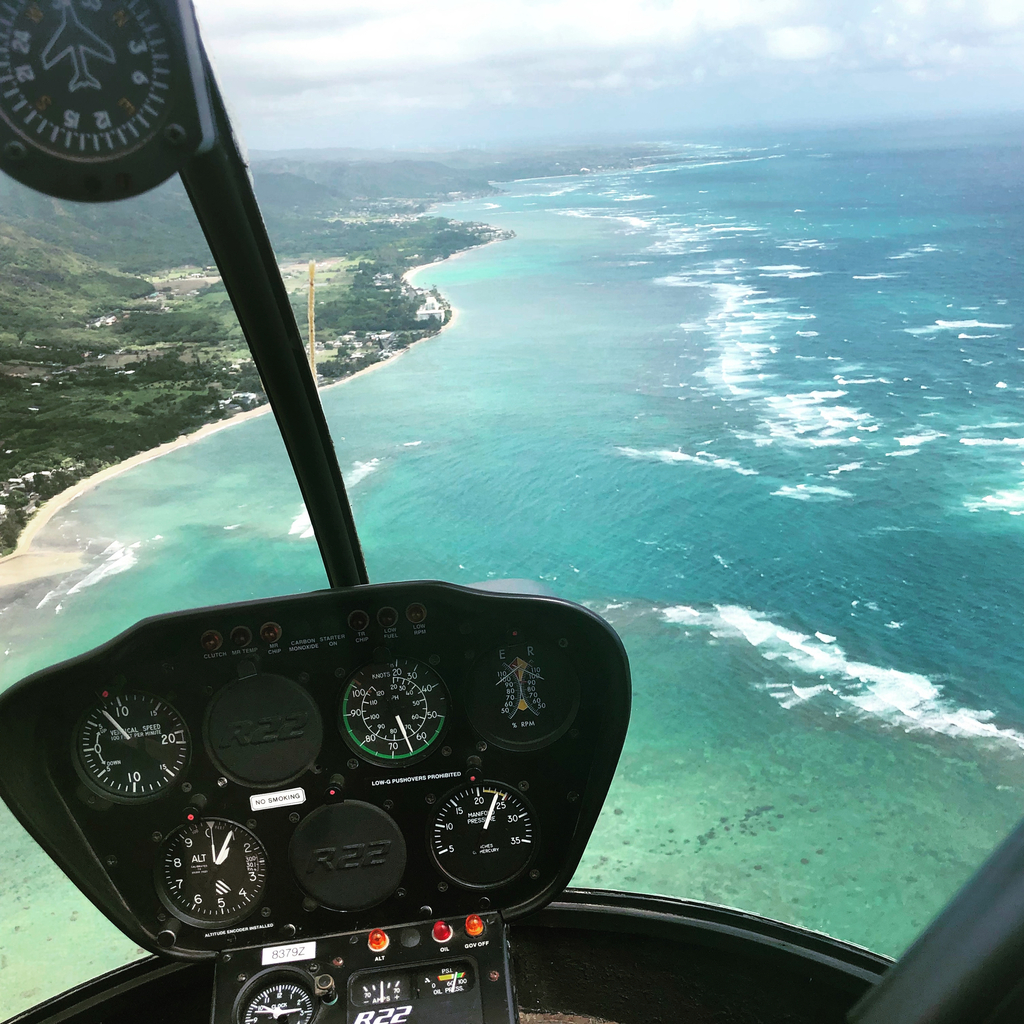 We will miss you! Thanks to all attendees for the wonderful week, to the people of Hawaii for keeping Hawaii beautiful, to you, dear reader, for making it this far, and to all our supporters whose donations make events like this possible. 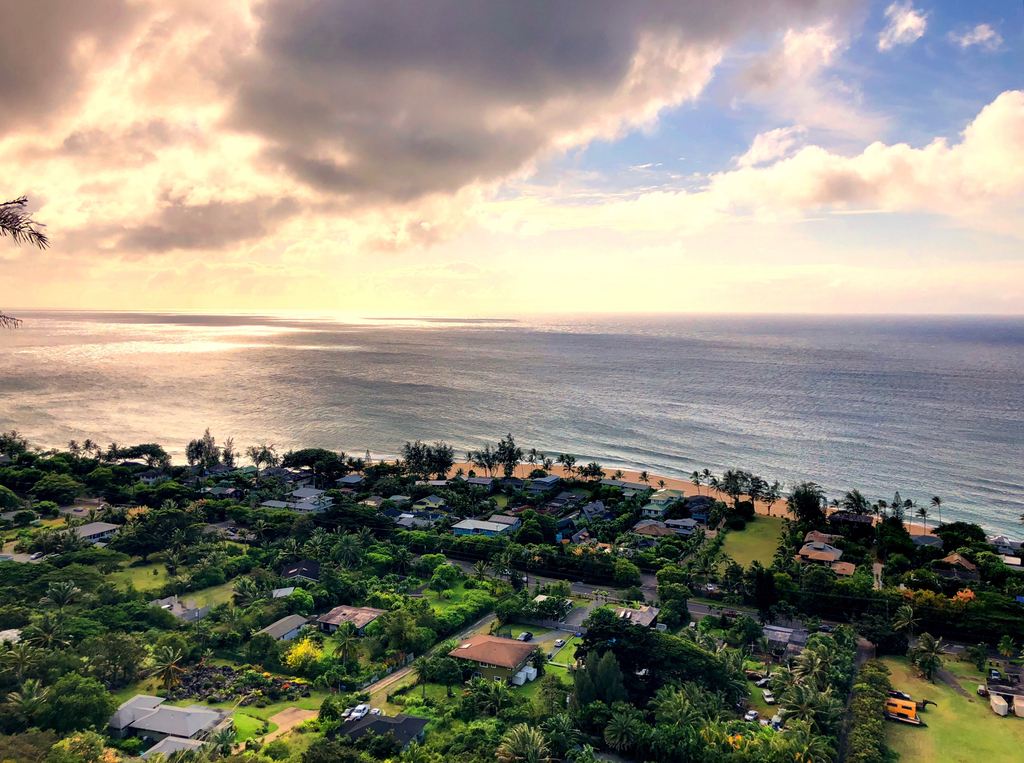 Our goal is to have the prototype in a usable state sometime this year, and we will likely put together another hackathon to help speed things along. See below for how you can participate in Group Income development too!